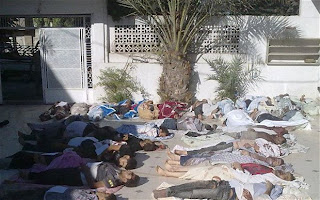 The Syrian regime was accused of perpetrating an “atrocity on a new scale” yesterday after activists reported the discovery of more than 300 corpses in Daraya, a town on the edge of Damascus.

Dozens of those killed were victims of summary executions carried out by government forces as they seized control of Daraya, on the Syrian capital’s southwestern outskirts, opposition groups said.

For five days last week Daraya had been subjected to one of the most ferocious army assaults of the 17-month uprising as President Bashar al-Assad made a second attempt in as many months to reassert control over the sprawling town.

As the fighting raged, local opposition activists had reported the deaths of scores of people, but the intensity of the bombardment meant that it was only after the army ended its assault that they were able to document the full scale of the devastation.

Activists said they had made a series of grim discoveries. In one building alone they found 36 bodies.

But the grimmest scene of all was encountered in the Abu Suleiman al Durani mosque, where video footage showed scores of corpses shrouded in blankets and laid out in rows.

It was not the only mosque where bodies were found, and it was unclear whether the victims had been brought from other parts of the town or had been killed as they sought sanctuary in places of worship where they wrongly believed they might be safe.

According to opposition activists, 120 bodies were discovered on Saturday and 201 more on Sunday. Other corpses remained on streets too dangerous for rescue-workers to reach because of the presence of loyalist snipers.

It is not known how many killed were civilians or rebel combatants, or how exactly they were killed. The London-based Syrian Observatory for Human Rights said most of the fatalities were caused by shelling but that 34 civilians, among them six women and six children, were “summarily executed”.

Activists in Daraya itself said that figure could be higher.

“We are in the process of identifying the bodies and documenting how they died,” Mohammed Hur told the Reuters news agency.

“Initial evidence shows that they were mostly shot at close range in the face, neck and head, execution style.”

“Female members from at least two families say that soldiers shot their brothers in front of them.”

The Syrian government did not specifically address the allegations, with state television merely reporting the success of a counter-insurgency operation.

Summary killings have increasingly become a feature of Syria’s civil war, particularly on the outskirts of Damascus.

Executions were reported in a number of restive Sunni suburbs in the capital last week, part of a government campaign, according to opposition groups, to terrorise the civilian population into denying the rebels succour.

Despite facing a strong rebel challenge in Damascus and Aleppo, Syria’s two largest cities, the regime said yesterday it would not countenance a negotiated settlement until the armed opposition had been eliminated.

“The plan for negotiations between the Syrian government and opposition will begin after purging Syria of armed groups,” Walid Muallem, the Syrian foreign minister, said, in what appeared to be an uncompromising message aimed at Lakhdar Brahimi, the incoming international envoy to Syria.

Meanwhile, Farouq al-Sharaa, the Syrian vice president, appeared in public for the first time in a month, ending speculation that he may have defected.
Posted by Unknown at 19:47