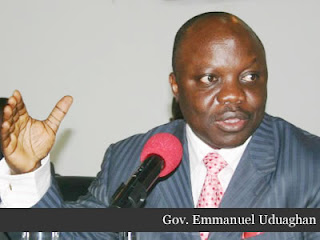 Delta State Governor, Emmanuel Uduaghan, has made a case for the increase of oil derivation revenue to oil-producing states from 13 per cent to 50 per cent.

Uduaghan made the call while delivering a lecture, Niger Delta: Beyond Resource Control, Burden and Realities of Transformation, in Asaba, arguing that the increase would compensate for past violence in the region and damage to their environments.

He explained that pleas for the increase were entirely in order, saying the issues on derivation should be based on equity and fairness, and called for proper funding and repositioning of the Ministry of Niger Delta.

“The Niger Delta people should be given the opportunity to see more profound programmes that would save their environment and open up their areas for economic activities that are not based on oil and gas,” he added.

He equally enjoined oil-producing states to diversify their internal revenue base, especially as the era in which oil may no longer exist is fast approaching.

“Oil wells are fast running dry and a time will come when Niger Delta states would look for alternative source of funding their programmes,”
he warned. “You should get the most you can from oil now before the post-oil era, because whether we like it or not, that era must come.”

He advised states to revive agriculture, and also challenged them to enhance rural industrialisation, revive and deepen manufacturing, clean up the environment, and upgrade infrastructures.
Posted by Unknown at 13:20