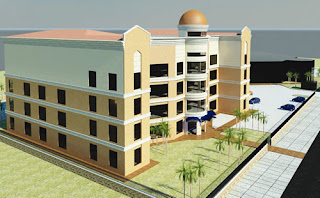 The cinema bug steadily coming to life in Nigeria has hit Warri, Delta State. In recent years, the aspect of the entertainment industry the oil-hub city has been famous for is stand-up comedy, as it has produced a good number of comedians.

But at a time that cinema life is crawling back, an imposing facility, Lighthouse Cinema House, has sprouted in Warri, beckoning people with its aesthetic grandeur. Located within an expansive complex that equally has two other large – size edifices – a hotel and conference centre – Light House Cinemas on Delta Steel Complex Expressway, Effurun promises to be a place to be.

A statement by the management of the cinema house indicates that being the first of its kind in the city, it has come at a time the city needs to reclaim its lost social life.

Among its facilities are five holes cinemas with plush and creatively built inte
Posted by Unknown at 16:23