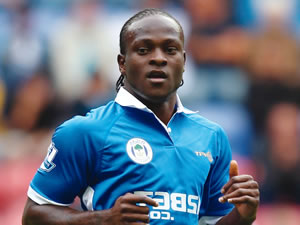 Victor Moses
After two months of going back and forth, Chelsea and Wigan have finally agreed for the transfer of Victor Moses to Stamford Bridge. The European champions finally met the Latics’ asking price for the Nigerian.

The Stamford Bridge team had seen four bids for Moses rejected publicly by Wigan chairman Dave Whelan during the course of a fractious transfer saga that had lasted since the end of last season. But a statement by Wigan and posted on their website on Thursday confirmed the agreement.

It read, “The club can confirm that after four unsuccessful bids from Chelsea for Victor Moses, a fifth bid has today finally met the valuation and terms set by Wigan Athletic and been accepted. The player has been given permission to speak with Chelsea.”

It has been reported that Wigan were demanding around £9m for Moses, who joined the Latics from Crystal Palace in 2010 and has risen to prominence after a series of impressive displays last season. They stepped down a bit from the £10m Whelan asked for.

The Super Eagles attacker featured prominently against Chelsea in their Premier League opener on Saturday with Wigan boss Roberto Martinez praising his efforts. The winger’s efforts were not enough to prevent Chelsea opening the season with a 2-0 victory at the DW Stadium, but he caused problems all afternoon and showed why the Blues were keen to take him to Stamford Bridge.

He said, “In the last 10 days Victor has got himself focused and he wanted to help the team. His performance showed that, but it’s unfair to ask any player to cope with that mental pressure.”

While Chelsea and Wigan have settled the differences, West Bromwich Albion have said they are bracing up for tough bargaining as teams renew bids for their prized attacker Osaze Odemwingie. Reports from England state that Sunderland and West Ham are ready to lock horns over Odemwingie after both clubs expressed an interest in the striker.

The 31-year-old Nigerian has scored 25 goals in the last two seasons for the Baggies and was again on target in their opening day win over Liverpool.

Odemwingie was the subject of a bid from Qatari club Al-Gharafa earlier this summer, which was rejected by the Premier League club. The Nigerian who got married this year was also not too keen with the offer.

The Baggies are adamant their valuation will have to be met before the striker is allowed to leave, The Daily Star reported. West Ham have been tracking Odemwingie and he has emerged as a leading target after their deal for Andy Carroll hit the buffers. Sam Allardyce, who coached another Nigerian Austin ‘Jay Jay’ Okocha with Bolton, wants a proven Premier League striker who can supply the goals that will ensure their top-flight status.

However, he will face competition from the Black Cats, who are assembling a new-look strike force.
Posted by Unknown at 16:29