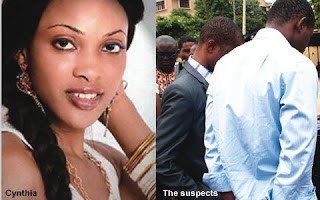 Cynthia Osokogu, the 24-year-old girl who was allegedly murderered by her BBM friends in FESTAC, Lagos, has been described by her best friend, Aishatu Ella, as hardworking.

In a comment posted on the internet, Ella said Cynthia was not a wayward youth as some members of the public tried to paint her on social media and in some publications.

Her comment read in part, “In the last few days, I have had my heart torn, stripped and broken in pieces first by the disappearance and death of my dearest friend and secondly by the wickedness exhibited by some Nigerians, passing judgment on someone they never knew or met.

“When she was officially declared missing, we put up a number online so people with information can call and help out. Of over 500 calls we received in three days, only two of those calls were from people who actually helped with information. One was my dear friend, Nuhu Kwajafa. The other was the Area Commander, who called to inform us of the arrest of the suspects.

“Others were heartbreaking to say the least.  I wondered how her mother would have coped if she had to deal with silliness, pettiness and undeserved hate from strangers, who just took one look at a lady and decided to judge her based on her looks.

“When the sad news of her death broke, I made a comment and said I hope ‘all those who have insisted she was with a man would have their answer now and let her rest in peace’. How wrong I was! They would only go back and manufacture a more hurtful and painful story and pass it around as facts.

“I have no comments for such people; I just want to share with you the real Cynthia we knew and not the one created in the last few days.

“Cynthia was born on November 10, 1987 to Gen Frank and Joy – Rita Osokogu. Udoka, as her mother named her, was a uniting factor in her family as a baby. Her mother had three boys before her. She was the last baby and only girl.

“Her parents settled in Jos where we were and still neighbours. We became friends because in those days, there were only few houses in the area.

Cynthia the model and businesswoman

“At 13 years, she was taller than me. She was of the same height with her brothers; she was a tomboy all the way, determined, stubborn and focused. As she grew, her mum and I playfully suggested she should try modelling because of her structure, Cynthia took it seriously; though her major focus was education, she gave modeling a shot and did quiet well as a model.

“In 2007, she got her first major run way job and I will never forget the day. She called me from Lagos after she had been paid; she said she wouldn’t want to waste the money and would buy clothes and bring to school to sell. The first batch of the clothes never made it to Keffi as industrious Cynthia who stayed with her brother at Airforce Quarters in Lagos, sold the clothes to her brother, his colleagues and their friends. She told me she made three times her capital and immediately re-invested it by buying more stock. She came to Keffi and rented a shop. That was the birth of her baby known as ‘dresscode’.

“I remember I bought her forms to one of the national competitions some years ago, she passed the screening stages and called me one day to say she was asked to compromise to get through the next round. I told her to withdraw and she did. That was in 2011. She never entered any major pageant after that.

Cynthia the sister and daughter

“Cynthia was like the baby sister I did not have. She was my confidant, stylist and a great comfort. We shared a lot, tears and smiles. She was always at my service.

“She was greatly involved in charity. Anytime I sent a text or post a picture of someone needing medical support, I could count on Cynthia as one of the first respondents.

“To her mother, Cynthia was her heart. Several times I would ask Cynthia not to go to Jos because of its volatility and she will reply saying, ‘ Mumsy is alone at home’.

“When it was time to serve, Cynthia opted for to crisis-ridden Jos in order to be close to her mother.

“At age 24, Cynthia had a successful business, and was running a post-graduate programme in Public Administration. She earned every kobo she had by hard work.

“The security situation in our country now is horrible; people are kidnapped, robbed and killed every day. Why is it so hard to believe that a young girl was killed while going to pursue her legitimate business?

“Her crime is being, young, pretty and a businesswoman.  People should have the decency to let us mourn in peace.”
Posted by Unknown at 16:18