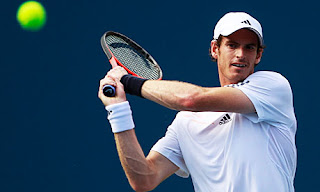 Andy Murray was forced to work hard by Alex Bogomolov Jr before winning in straight sets.
What might have been a cakewalk briefly threatened to turn into a forced march for Andy Murray on a steamy, windy day before he hustled his way to a straight-sets win over Alex Bogomolov Jr at the start of the US Open.

"I'd say I was six or seven out of 10," Murray said after wrapping up a contest that started chaotically and finished as expected, 6-2, 6-4, 6-1 in two hours and 15 minutes. "I didn't serve particularly well at the start of the match but I won in three sets against a pretty tough opponent."

If either player had shouted, "Gimme a break," it could easily have been taken literally, Murray giving up his serve four times, in gratitude for nine by Bogomolov.

There was more charity in this match than you'd find in a soup kitchen and, had the Russian played even vaguely in keeping with his piratical appearance, he might have stolen the second set. But he was as unreliable as he was entertaining, whining to the referee, complaining of an upset stomach near the end and mixing brilliant winners with rank miss-hits.

He rarely looked like repeating the shock defeat he inflicted on Murray in Miami at the start of the American hard court season last year. However, they often have trained together in Florida, where Murray has a winter training camp and, although Bogomolov does not usually get the better of the Scot, a measure of dangerous familiarity might have infected the third seed's tennis against a player ranked 68 places below him in the world rankings.

Murray is now pitched into the absurdity of this tournament's scheduling, determined not on logic but the demands of the host broadcaster for an action-packed final weekend. His next engagement is on Thursday against the talented but inconsistent Ivan Dodig, who last year beat Rafael Nadal on hard court in Canada and on Monday conceded just three games against Hiroki Moriya of Japan.

Murray sent a scare through his camp grabbing at his left hamstring when leading 3-1 and deuce in the third set while stretching his stride in vain pursuit of a lob but, to the amusement of some and relief of others, the pain was forgotten when he moved into a 4-1 lead, rendered insignificant at 5-1 and consigned to history at 6-1.

"I was struggling a bit," Murray said. "Just a little bit of cramp. It was a long game, long points, really humid, so I've got to stay hydrated for the next couple of days. The wind was tough, trying to hit a flatter ball through the wind, and with a lot more top spin from the other end."

In the first set, the Scot got his first serve in once in every four attempts, as poor a ratio as he can have endured in his entire career, although he rounded the statistic up to 49% by the end. He hardly got off to a blinding start, a netted forehand gifting Bogomolov a break within a couple of minutes. The Russian returned the favour instantly and Murray was relieved after jumping into a winning cross-court smash to level – but not for long, as a bizarre pattern unfolded. In a surreal repeat of the sequence of give-and-take he experienced against David Ferrer at the French Open, Murray was broken again in the third game.

Would Bogomolov oblige to turn a tennis match into a pantomime of misfortune? Of course. Murray got three break points, converting the third with a forehand volley at the net (having earlier murdered one on the backhand) and it seemed we might go through the entire match with nobody capable of holding serve.

At 30-all, Murray drilled a regulation forehand into the net, with his opponent ducking for cover and glad of a ludicrous break point. Ivan Lendl, his coach, would have liked the intent if not the execution of that shot. With his serve malfunctioning, and his shoes giving up on him behind the recently dried baseline, Murray steeled himself to grab the lead at 3-2.

And so it went, back and forth, up and down, this way and that. It was not so much a comedy as a farce of errors. The oddity was, there was some quality shot-making in between the mistakes, making what for the players must have been agony a quite pleasing spectacle for the fans, basking in mid-afternoon sunshine in seats that had not long before been pounded by a thunderstorm.

The rain did little more than delay the exit earlier of Heather Watson against eighth seed Li Na. It is the curse of the unseeded: drawing a big name in the first round of a slam. Last year Watson's debut was a dream and a nightmare rolled into one: on the main court in the Arthur Ashe Stadium … against Maria Sharapova.

She took a set off the Russian and it was one of the tournament's better losses but Britain's No1 craves more than encouraging performances in the spotlight.

Watson won the junior title to announce her arrival here three years ago and, although she played well enough, Li's power and placement were too much in a 6-2, 6-3 win that did little more than sharpen her reflexes for her next match against the Australian qualifier Casey Dellacqua.