Laide Bakare: My Husband Wants A DNA? He Must Be Mad 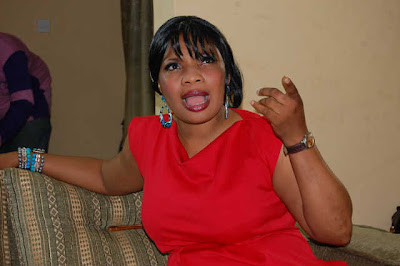 Actress Laide Bakare, who has been enmeshed in a paternity mess with two men, has finally reacted to the claims by her estranged husband, Olumide Okunfulire, that she should submit her new baby for a DNA test to ascertain the true father of the new child.

Olumide insisted that he and his estranged wife, Laide Bakare, had sex several times in the last 9 months and wondered why she wants to give his baby to a man, popular known as ATM.

Reacting to her husband's claims, Laide Bakare said:
He must be “mad and oozing from chronic drunkenness" to dare ask her to come out for a DNA test in order to prove the father of her new baby.

In a chat with City People she said, “Ordinarily, I would not believe all the stories of him saying those rubbish in the media. Maybe he was being pushed to say those things by those who know nothing about how we lived together or, maybe, they just want to put him in a big trouble.”

Laide, who failed to confirm if she was having sex with both men, simply said "I’m sure he has run mad".
Posted by Unknown at 07:38