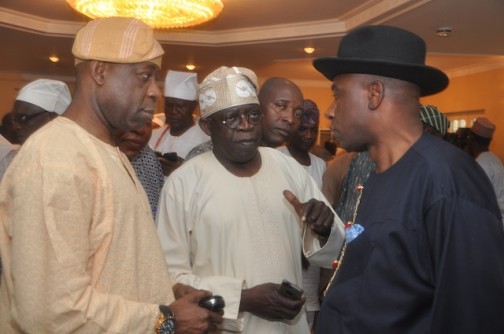 The rumour is everywhere that the Rivers State Governor, Rotimi Amaechi, was being punished by President Goodluck Jonathan due to his close association with leaders of the opposition, especially the national leader of the Action Congress of Nigeria, ACN, Bola Tinubu.

And the ACN has not failed to defend Amaechi whenever the Presidency tries to rubbish him. So it was like home coming for Governor Amaechi on Friday as he visited Tinubu in his house...

During the visit, enogmaurice.blogspot.Com gathered that Amaechi still played politics as he urged Nigerians to protect their votes in the coming election, saying that it is the only way to prevent manipulation in 2015.

Amaechi who visited Tinubu at his Ikoyi, Lagos, residence also condoled with the political strong man over the death of his mother, Alhaja Abibat Mogaji. 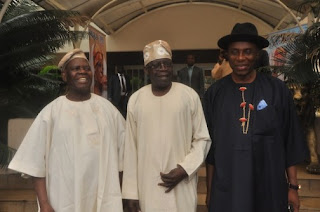 Probably referring to how the opposition can win the next election if the votes are allowed to count, Amaechi said “Things should be done in such a way that the electorate defend their votes, not just leaving them in the custody of the police alone or leaving the place after voting.”
Posted by Unknown at 13:02