The Sacrifice of an Olympian: A Story of Gabby Douglas and Her Mom 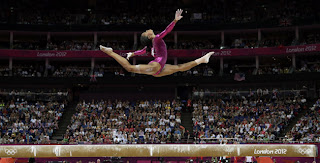 When Gabby Douglas was 12 years old, she asked her mom if she could move 3,000 miles away from home to train with an elite gymnastics coach. Her mom said no, but finally relented two years later. Now 16, the gymnast is leading Team USA at 2012 London Games and is working to make her childhood dreams come true.
Douglas was only three years old when her older sister, who was taking gymnastics classes, taught her a few moves. "I was the baby sister that could do all the tricks," says Douglas, who is the youngest of four children. Her family took notice of the ease at which she could perform perfect cartwheels, even on one hand. When Douglas was six, she began to take gymnastics classes.

In 2008, Douglas and her family watched Olympian Shawn Johnson compete in the Beijing Games. According to Douglas' mom, Natalie Hawkins, the young gymnast was taking mental notes. Says Hawkins, "She [Douglas] said, 'Look at Shawn and her coach. They look like they are having a really good time. I would like for him to maybe be my coach.'"

Douglas was referring to Yiang Chow of Chow's Gymnastics and Dance Institute, who helped Johnson earn a gold medal victory in 2008. Pleading her case to train with Chow, a then 12-year-old Douglas told her mom: "My coaches aren't teaching me anything new. I need a higher degree of difficulty. Mom, I need to leave. I need to get better coaching. I need to make this dream become real."

Mom did some early research and realized Chow's training facility was in West Des Moines, Iowa. Hawkins and her her family live in Virginia Beach, VA.  Says Hawkins, "I told her there was no way. It's not gonna happen."

Douglas continued her training at her local gym. But she was also persistent in her quest to train with Chow, finally telling her mom, "I think if I had Coach Chow as my coach, I might be able to do this."

Douglas wanted to compete in the Olympics, even though her journey would take her far from home and require that she live with another family. While her passion and drive were admirable, it posed a truly emotional dilemma for her mom. "I know I need to do it," Hawkins recalls thinking, "but how do I send my child to a family that I don't know, to a community that I don't know. How do I do that?"

Douglas' host mom was Missy Parton, whose daughter was also training with Chow. Parton welcomed the young athlete with open arms. "I knew that she needed that love and comfort that only comes from a family," says Parton.

Hawkins is still involved in every day and every aspect of her daughter's life, even if it's via video conference. "It's funny that even more than 3,000 miles away, I can still mother her. I can still be mom in her life," says Hawkins.

When Douglas' family came to visit her in Des Moines in 2011, the young teen didn't want them to leave. Homesick, she wanted to return to Virginia Beach. And it was Hawkins who had to provide the tough love, telling her daughter, "You can't come home after all this. You've sacrificed all of this time. You've sacrificed your body. You've sacrificed everything for this dream...You have team members, you have a country that you're representing."

Douglas was despondent, saying "Mom, come on, you're supposed to be on my side on this. You're supposed to have the baby come home. She said, 'No, life is not easy. You have to fight and just refuse to quit."

Douglas took her mom's advice to heart. Now, one year later, Douglas is one of the youngest athletes to compete in the 2012 London Games. She and teammate Aly Raisman will represent the U.S. in the all-around final. With her electric smile and spirit, she is poised to lead the U.S. women's gymnastics team, one that legendary gymnastics coach Bela Karolyi says is sure to win gold.

Natalie Hawkins will be cheering Douglas and Team USA on, all the while remembering the long journey -- for mom and daughter -- that brought them to London. "Letting go of Gabrielle was one of the hardest things I've ever done in my life. But it's now one of the most rewarding things that I ever got to experience in my life because there's no greater joy for a parent than to see their child reach their dream."
Posted by Unknown at 12:34