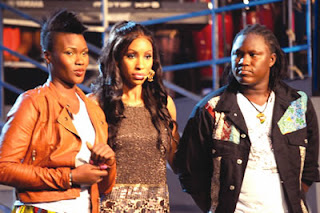 Tega Apochi and Edward Wright have become the first set of contestants to be evicted from the ongoing Project Fame reality show. They were both chosen after an elimination show held on Sunday, which began with group performances from all the participants.

While the female contestants performed an ensemble of En Vogue’s Don’t Let Go, the boys took up the challenge with Backstreet boys’, Don’t Leave Me.

With the co-anchor, Joseph Benjami, ‘unavoidably’ absent on the show, Adora Oleh hosted it and introduced the 15 contestants whose fate were to be determined that night.

Amidst rising tension, Joshua Effriyie, Tega Apochi, Edward Wright, Oyinkansade Akande and Chinyere Akwueh were announced as the contestants with the least number of votes, who would have to perform their way out of the claws of probation.

After repeating songs they sang at their last performance, the judges and faculty saved Akwueh and Effriye respectively, while Akande narrowly escaped elimination. This decision left Apochi and Wright as the two to be eliminated.

With two more to be eliminated and 13 contestants left in the Academy, the race toughens as their fate lies in the hands of the voting public.
Posted by Unknown at 16:14