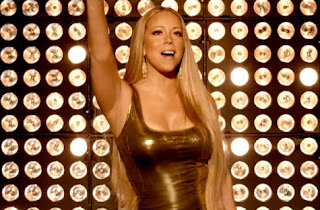 Mariah Carey is a knockout in the video for “Triumphant (Get ‘Em),” directed by her husband Nick Cannon. Meek Mill plays a boxer, duking it out in the ring with his opponent as Mariah, DJ Khaled, and a fur-clad Rick Ross cheer from the sidelines. The blonde bombshell shows off her sexy body while playing a ring girl and glitters in all gold as she performs in a shimmering gown.

The uplifting record, produced by Jermaine Dupri and Bryan-Michael Cox, was inspired by Nick’s health scare earlier this year. “I wrote ‘Triumphant’ when I was going through a difficult time and it helped me get through it,” said Mimi.

Mariah’s new album won’t arrive until next year when she takes her spot on the judges’ panel on “American Idol.
Posted by Unknown at 18:14