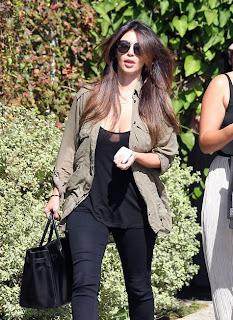 I don’t watch ‘Keeping Up With the Kardashians’ which surprises almost everyone I tell. Even my brother-in-law watches it, although he swears he’s only doing it because my sister likes it (uh-huh, suuuuuure). I just cannot do it. I feel like if I watch it – then I’m supporting the Kardashians-taking-over-the-world. I know, makes no sense.
Apparently on KUWTK, Kim Kardashian’s boyfriend, Kanye West called her closet “ghetto”, and made her donate 100 pairs of designer shoes! The rapper went through Kim’s huge collection of shoes and clothes with the help of a stylist. Kim’s closet ended up being purged of shoes and clothes, many of them un-worn!
Kim sat back and let Kanye decide which items stayed, and which items went.


Even a fur lined Louis Vuitton bag, which Kim admitted sheepishly that she was keeping for any future daughter to inherit, was consigned to the reject pile.
‘Shouldn’t I just keep this for, like, my daughter one day?’ she asked West.
Cringingly he failed to appreciate her hints that they might one day have a family, instead remaining pointedly silent.
‘Kanye is coming over today with his stylist, and he is giving me a makeover,’ Kim had happily announced earlier.
And despite her boyfriend taking over her closet, Kim claimed that he had ‘inspired me to be a little bit more of an individual’.
One person who wasn’t impressed was Kim’s sister, Khloe.
She was furious, pointing out that she and Kim shared the same taste.
‘I feel like half that stuff I have, so are you like saying that I need to get a stylist?’ she asked Kim.
And she picked up one shoes saying: ‘You know I love this!’
When Kim replied that the shoes had been labelled ‘ghetto’ by Kanye, Khloe was outraged.
‘You gotta have a little ghetto in your life!’ she squealed.
But Kim didn’t care, in thrall to Kanye.
And he seemed equally impressed, at least with his girlfriend’s ‘magazine worthy’ curves.
”You look amazing,’ he whispered, as he nuzzled her in front of the cameras.
Kanye didn’t leave his girlfriend with nothing to wear, however, bringing with him a whole rail of replacement threads.
‘Look how dope this s**t is,’ he said, as he perused through Kim’s new stack of clothes.
Kim, 31, then tried on a cleavage-baring green dress, with Kanye being very pleased with the results.
‘[You're] getting on best dressed lists now,’ he raves. ‘You’re stepping into this territory. You look amazing – it’s a new Kim!’
At least the clothes won’t be going to waste. Kim tweeted: ‘The clothes I got rid of will be up on EBay next month for a charity auction! Going to Life Change Community Church.’ Kim’s sooooooooo lucky to have Kanye! She’s getting on best-dressed lists now! What would she ever have done without him!? Ugh barf.