K-Solo & wife claim the beating &break up was all acting? Really? Lol 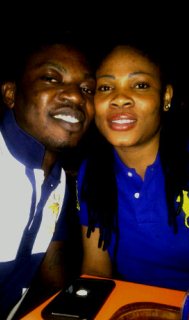 I'm sure you all know this is BS, yeah? lol. I got a few calls from Kike's people when they were still fighting, and half the time they called me from a police station. I think the reasonable thing to do would have been to say that all is forgiven and they've made up instead of this nonsense! The beating that was witnessed by several people at The Palms was all acting? The bruises on her face is make-up? The other lady whose name Kike mentioned in her interviews that called me from the US was acting too? LMAO! How ridiculous!

I'm really annoyed by this sha...seriously annoyed. Because I feel like a lot of women in Nigeria are condoning domestic violence. Instead of speaking out and moving the hell on, they are looking for excuses to stay with men who hit them - like marriage is a do or die affair. Like Joan Rivers said, if a man hits you once, he will do it again.

Read all about their mess HERE, HERE, and HERE and hear the nonsense they are both saying now after the cut!