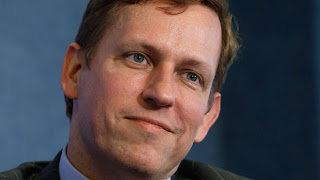 According to regulatory filings late Thursday, Thiel unloaded about 20.06 million shares of Facebook on August 16 and August 17 at an average price of $19.73. Those transactions netted Thiel $395.81 million.

Had Thiel sold that tranche Facebook’s lofty IPO price of $38 back in May, he would have made about $762 million.

But don’t feel too bad for Thiel, a partner at venture-capital firm Founders Fund, who has made more than $1 billion on his savvy support for a young Facebook.

Thiel also unloaded about 16.8 million shares for $638 million when Facebook went public in May.

Even after last week’s sale, Thiel still remains on Facebook’s board of directors and still owns stock in the company worth about $112 million.

Facebook has lost about half of its value since the high-profile IPO amid persistent concerns about the social network’s ability to monetize its mobile business and attract advertisers in general.
Posted by Unknown at 13:17