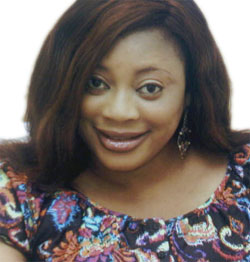 Since appearing in a ‘waka pass’ role in Zeb Ejiro’s ‘Mortal Inheritance’, a film that starred Omotola Jalade-Ekeinde and Fred Amata, in the mid-90s, beautiful Ayo Adesanya, who once said her forget-me-not-eyes are special blessing from God, has worked her way to the very top of the ladder in Nollywood.

She has seen both worlds of Yoruba and English speaking genres of films, having starred in more than a half a century films but among all those films only one film has stretched her to the limit of her enterprise as an actress. The film is her latest film ‘Amope Alasela’ where she plays a dual role.

In a chat with HVP, discussing how well the movie is doing in the market, the mother of one who celebrated her birthday on Friday, August 11th with close friends, beamed, saying “ I really thank God for that. I have received positive comments and reviews about the movie, and they have continued to come in. The other day, I was in a bank, and a woman came up to me to give me a peck.

She was like, ‘oh, that movie was great.’ I really thank God for that. I realised how much people have fallen in love with the movie. It was particularly tough for me to play a dual role, one a young housewife, and the other, an old mother-in-law. She was a very funny character who walks in funny way. Switching the roles was tough and very tasking.

Playing two roles sapped all my energy, because I had to wear make up to play the old woman which was very hectic, and playing the young woman was not exactly a piece of cake too. Being one character and immediately switching to a younger person was indeed a big challenge for me. I will say it my most challenging role yet” she said.
Posted by Unknown at 18:22