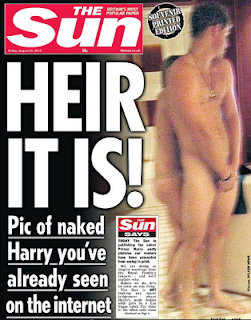 UK press was banned from publishing pictures of naked Prince Harry by the royal family. The royal family lawyers threatened legal action and St James’s Palace warned that the pictures were a gross invasion of the young royal's privacy.

The pictures were released online by TMZ on Wednesday and no British TV station or newspaper touched it until The Sun defied all warnings and published the photos on their cover yesterday, saying it was ridiculous to be banned from publishing a photo over 70 million people have already seen

Were they right to publish it? Their explanations for publishing the photo when you continue...
TODAY The Sun is publishing the naked Prince Harry party pictures our readers have been prevented from seeing in print.
We are doing so despite warnings from the Royal Family’s lawyers — and we’ll explain why.
Before we do, let’s be clear on one thing.

The Sun is NOT making any moral judgement about Harry’s nude frolics with girls in a Las Vegas hotel. Far from it. He often sails close to the wind for a Royal — but he’s 27, single and a soldier. We like him.

We are publishing the photos because we think Sun readers have a right to see them.

The reasons for that go beyond this one story.

The images were first published on the web three days ago. But the Palace’s lawyers, via the Press Complaints Commission, warned the UK’s newspapers against printing them, claiming they would breach Harry’s privacy and the PCC Code.

Since then the entire UK media — print, online and TV — has reported on them and told readers and viewers how to find them on TMZ.com, the website that first published them, and on countless other sites that followed suit.

That coverage put those pictures a mouse-click away from anyone in the 77 per cent of British households with internet access.

Millions duly found them on sites from Canada to New Zealand. By yesterday, the photographs were indisputably in the public domain everywhere in the world.
That generated a legitimate public debate about the behaviour of the man who is third in line to the throne and increasingly taking on official duties, as he did most recently at the Olympics’ closing ceremony.
Yet as that debate went on in homes, factories, offices and pubs, the Press were still effectively banned from using the pictures.

The many millions of people who get their news in print, or have no web access, could not take a full part in that national conversation because they could not see the images.
The Royal Family’s lawyers claim there is no public interest in The Sun running the photos. This is a favourite mantra of those who wish to muzzle the world’s most vibrant newspapers, here in Britain — stuffily declaring that a story has “no public interest”, as though it were an unassailable fact.
But there is a clear public interest in publishing the Harry pictures, in order for the debate around them to be fully informed. The photos have potential implications for the Prince’s image representing Britain around the world.

There are questions over his security during the Las Vegas holiday. Questions as to whether his position in the Army might be affected.

Further, we believe Harry has compromised his own privacy.
These are not pictures of him and a girlfriend at Balmoral. The Prince was in Vegas, the party capital of a country with strong freedom-of-speech laws, frolicking in the pool before inviting strangers to his hotel room for a game of strip billiards.