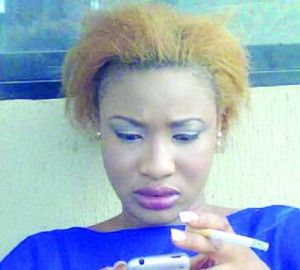 Popular Nollywood actress Tonto Dikeh has sensationally revealed that the sudden end to her smoking addiction came through the prayers of Pastor T.B.Joshua via his Christian station Emmanuel TV.*

Dikeh, who rose to fame after becoming the runner up in the Nigerian reality show, ‘The Next Movie Star’ in 2006, had garnered a controversial reputation in Nollywood for being a heavy smoker.

According to Dikeh, she started chain-smoking at the age of 13 and there seemed no signs of the habit waning. When questioned about her smoking in an interview with Nigeria’s Nation Newspaper early last year, the Rivers State born star said,

“If I want to smoke, I handle a stick of cigarette and I smoke it hard. It is my life I can decide to smoke myself to hell. It’s nobody’s business.”

The habit recently led to a serious clash between her and Ghanaian actor Van Vicker when he bitterly complained at her smoking on set, culminating in a heavy exchange of words. When probed in September 2011 about the health implications of her habit, the care-free actress retorted, *“My smoking habit doesn’t affect your life in anyway. If I die tomorrow, you’re not going to bury me. My father has the money to bury me. So, why are they talking about it?”

However, there was a sudden twist in the tale in May 2012 when, seemingly out of the blue, Tonto tweeted to her over 80,000 followers on Twitter, ‘I’ve good news for those who wish me well. Its silly good news but ya’ll going
to love this.

I quit smoking!’ Although the announcement was met with almost unanimous approval from her fans, speculation was rife as to what caused her sudden decision, many doubting whether it would actually last.
But in an online article published this week, the sultry actress shed light on the spiritual element to her quitting in an interview with Nigerian entertainment magazine, ‘E24-7’.

*“I didn’t quit smoking by myself,”* she explained to Biodun Kupoluyi. “I was watching a program on TV with Prophet T.B. Joshua and he was laying hands on people and praying for them. I love to watch his programs on
Emmanuel TV. When he was praying, he said, ‘Lay your hands on the TV’ and I just laid my hands that day. I actually needed something else from God, not to quit smoking because I loved smoking! However, after praying I sat back
and I think I slept off.”

After a short nap, Tonto awoke and attempted to smoke as usual. However,according to her, something inexplicably supernatural had happened. *“When I woke up, I took a stick of cigarette and I felt crazy. I couldn’t even
imagine that I took it up to smoke in the first place. It felt like poison!” An addiction of 14 years was ended through a simple prayer on television. Three months down the line, Dikeh has remained clean from smoking.

Judging by online reaction to Tonto’s revelation, it appears her experience is not an isolated one. Many viewers of Joshua’s Emmanuel TV testified to similar experiences, including Lovemore Chibvongodze from United Kingdom
who told the official T.B. Joshua Ministries Facebook Page, followed by close to 300,000 people, how his 34 year addiction to smoking and drinking alcohol ended through prayers on Emmanuel TV.

Joshua, who was recently adjudged by Paris-based magazine, ‘The Africa Report’ to be among the 50 most influential Africans, is growing increasingly popular across Africa largely due to the increase in awareness of and intrigue in Emmanuel TV.

Speaking on T.B. Joshua’s positive influence in her life, Tonto said, *“I watch him every day, I write to him every time I can, I tweet on him. I think that he is a person that influences my life positively in a lot of ways just through the TV alone… I am following him because I think he is following Jesus. I just love him because he is a man of God and he has specially affected my life and my friends too.”
Posted by Unknown at 14:50