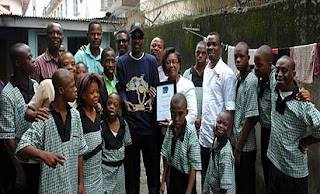 *Cross section of the children with Down Syndrome and officials of the Down Syndrome Foundation of Nigeria during an activity in their office in Lagos.


Fresh diplomatic row may be brewing following the denial of  entry visas to a delegation of members of the  Down Syndrome Foundation of Nigeria, DSFN, by the South African High Commission in Nigeria.

The delegation was billed to attend the 2012 World Down Syndrome Congress  holding in Cape Town South Africa, but was denied entry visas on allegation of possession of invalid Yellow Cards.

Findings reveal that the action of the High Commission may not be unconnected with the recent face off between the Federal Government of Nigeria and their South African Counterpart concerning the Yellow Card Vaccination Certificates which was, however, resolved after the South African Government apologised for acting inappropriately.

However, since the denial of the visas to the delegation,  several of the children living with Down Syndrome who were among those affected, have become withdrawn, moody and generally dejected.

This development, according to the National President, DSFN, Mrs. Rose Mordi,  interpreted as a feeling of rejection by the society that is supposed to protect and care for them.

Speaking in Lagos to register their greviances over the matter, Mordi who condemned the action, accused the Commission of discriminating and stigmatising people with Down Syndrome.

Mordi said the excuse of the delegates holding invalid and fake Yellow Cards was vindictive, callous and an insult to the Foundation as well as the Federal Government of Nigeria.

Her words: “The Foundation’s delegates which included parents, children and volunteers had made the application for the visitors’ visas on the 27th of July, 2012 at the VFS office and had their Reference Number SALA/270712/0145 and had made arrangements, hotel accommodation, congress registration and so on in preparation for the trip only to be given the excuse which is not only suspicious and totally unacceptable but smacks of arrogant disregard for charity organisations working hard to make a difference in the lives of people living with challenges and an insult to our government.”

Further, Mordi argued: “For the benefit of doubt, all the Yellow Cards submitted by the delegates as a prerequisite requirement were obtained from Local Government Councils that have the constitutional right to issue such vaccinations and all the delegates have been vaccinated as many of them have travelled outside Nigeria with the same Yellow Cards and were not subjected to stigmatisation as was shown by the South African High Commission, “she explained.

She said DSFN had  written to both the Federal Government and South African Government over what it described as injustice to the children. She added that denial was a vindictive continuance of what occurred few months back.

Mordi who was billed to receive an award on behalf of Nigeria at the Conference, regretted that the action had denied Nigerians with Down Syndrome the opportunity to interact with their counterparts all over the world.

Speaking Legal Adviser of the Foundation, Amugo-Umukoro Sylvia said already, the Foundation has written to the Embassy to explain what made the yellow cards invalid.

She threatened that the Foundation would not fail to go to court to seek compensation should the embassy fails to respond to their letter. According to her, “These cards last for 10 years and were obtained from government recognised medical centres and by medical trained personnel on vaccinations.

We got them on different dates, by different people and different point. What makes it invalid? We also want to know if there are specific places or colour of cards they want applicants to come up with and how much it should cost.”
Posted by Unknown at 16:56