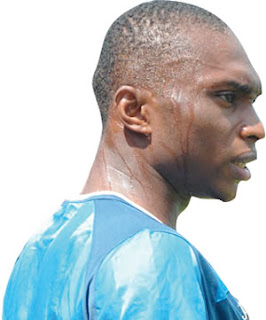 The highly-rated striker signed the contract on Thursday in Istanbul when he was thought to be bereaved and believed to be at home following the news of his father’s death.

“I am very happy to be transferred to a club as big as Rizerspor,” the striker said.

“From the first moment that Rizespor showed interest in me, I knew they are a serious and ambitious team. I believe I will be successful here, everything here is nice, the stadium and everything, I will do my best to score many goals.”

He has scored five goals in the Nigeria Premier League this season.

According to an official statement, Uche was excused from the Eagles training camp in Abuja to allow him return to his family in Abia State following the death of his father while he was away on international duty last week.
Posted by Unknown at 16:33