Ali Baba: I had so many scattered dreams before comedy fell into place 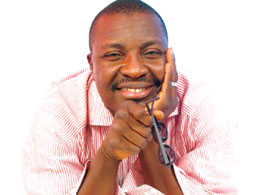 Renowned comedian, Atunyota Alleluya Akporobomerere, popularly known as Ali Baba, has come a long way. At a time when everyone thought it scornful to be addressed as a ‘comedian’ but would prefer the tag, ‘Master of Ceremony’, Ali Baba came up courageously and creatively, subsequently changing history by pioneering stand-up comedy.

22 years on,  Ali Baba has continued to set the pace in comedy.  He brought another dimension to the business when, at a recent event, he performed non-stop for six hours without repeating a joke. Interestingly, the Warri-born comedian possessed no remarkable comic trait as a child but only discovered his talent half way into obtaining his degree in religious studies & philosophy at the then Bendel State University. He is our guest today.

Do you really see yourself as the god-father of Nigerian comedy?

I don’t know what the criterion for qualifying somebody to be a god-father is, but I do know that I was one of the people who started comedy in Nigeria, alongside Mohammed Danjuma, Ibokoko, Basoj, Agoma, Alarm Blow, and a few others.

We were the frontliners, and quite a number of people believe we set the pace. So, I would say being a god-father is relative.

But it is often said that you started stand-up comedy in Nigeria?

Yes. I started stand-up comedy in Ekpoma in 1987. As I did it, a few other people began to emulate me. Some were practising it on the side, and they felt we could go into it fully by forming a formidable force. We gradually broke into corporate, religious, political, military and so many other institutions.

We gradually became acceptable as people saw our different varieties. Actually, what existed hitherto were simply slightly funny people who served as Master of Ceremonies- MCs. Though I started comedy in school, I had to relocate to Lagos in 1990 in search of greener pasture like many would say.  I chose Lagos because I noted that all the schools in Edo State then, even in the University of Port Harcourt, would at most pay N500 per show.

Meanwhile, Therapy students of LUTH could pay N1000; the clubs in the University of Lagos paid N1,200 and YABATECH students paid up to N1,000 per show. I therefore figured that Lagos was a better place for me. At the time I came to Lagos, I was already charging N1,000, N2,000 per show.

Was your first pay quite impressive?

My first performance was by accident, and I got paid about N50. That was around 1987, and my allowance from home was around N100, N120. From earning N50 to N100 per show, for making people laugh, I reasoned that comedy could fetch me serious money if well packaged. I did a show in the University of Benin that gave me N600. So, I figured that, if I could earn that kind of money within a month, and I do up to five events, it meant that if I could do it more professionally, I would earn more money.

After you graduated, did you have to work in any paid-employment?

Yes I did. I worked in various corporate organisations, including an advertising agency. I was as well doing comedy at this time. However, comedy was so strong. What I was earning in the company was like 10% of what I could earn from a major gig.

So, I needed to begin to develop and market myself so I could increase what I earned from comedy, instead of waiting for 30 days for my monthly salary from my employer. Along the line, I did some shows with the Charley Boy Show. I also did Friday Night Life, and Night Train with Bisi Olatilo on the NTA network.

I later had to resign my employment to be able to concentrate on comedy. I used every platform that I performed at as a promotion for myself, and my network soon began to expand through referrals and appreciations. I also promoted myself by doing adverts in papers, billboards, car stickers, and radio jingles.

Actually, by 1998, I had registered my company, Ali Baba Hiccupurathird. It was in the same year that I erected three billboards in strategic locations in Lagos- Ozumba Mbadiwe Street, Victoria Island; Osborne Road, Ikoyi; and Marina. I actually paid for two years for each of the billboards, and they carried a simple message, ‘Ali Baba — Being Funny is Serious Business.’ That triggered the transformation in the comedy business in Nigeria.

While growing up, were you known for comic prowess?

So, how did your family react to your chosen “career”?

My family, especially my dad, didn’t like it at all. He had wanted me to switch to law in my second year so I would become a lawyer. Even my uncle whom I lived with at 1004 Flats when I relocated to Lagos threw me out of his apartment because of comedy, simply because he felt I would be a bad influence on the children in the house because of my late night life. Eventually, I took shelter at the Lagos Bar Beach with a friend who was living on the beach. Then, we had huts where we slept at nights.

How prosperous would you say comedy has made you?

To me, a job is supposed to be able to put food on your table, provide shelter, fame and recognition(if possible), take care of your future, give you job satisfaction and then enable you to empower some other people. Comedy has done all of that for me! As a matter of fact, coming from nowhere to where I am today is one of the sweetest things in my life; my dad is a retired soldier man and my mum is a farmer.

But do you know people now see comedy as a line for never-do-wells?

The truth however is that educational qualification is not a hindrance to anyone in the line of comedy. Some of us are also from very good homes.
Posted by Unknown at 18:28