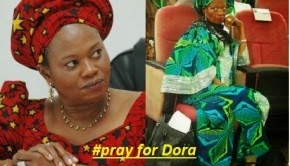 Many are worried and the tension increased on Friday evening when rumours of her death hit the cyber space but the reported death of former minister of information Prof. Dora Akunyili in an Indian hospital, where she was rushed to for medical attention, has been dispelled by her media aide, Mr Isaac Umunna.


“I don’t know why people are peddling this rumour. It is baseless. And, as you may know, former governor Peter Obi only three days ago visited her in the hospital in India and he was received by her husband and her doctors who confirmed to him that she was responding to treatment.

"And, as I speak to you now, I just came out from the church. That was why I could not take your call earlier because I was in the church. If the rumour was true, I wouldn’t have been in the church now. And I have been in contact with them. I have been speaking with some of our people who are with her, and we spoke not long ago. So no such thing they are saying happened.”

Umunna, who spoke to Leadership in Abuja insisted that Madam Akunyili is responding to treatment and they believe she would be fine at the end of the day and return home safely.
Posted by Unknown at 16:51