How Pastor Rapes this 12yrs Old Girl Inside Toilet 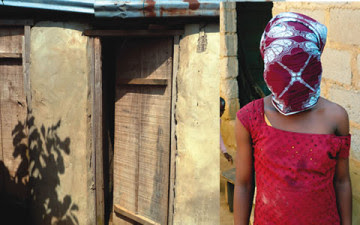 Why would anyone who calls himself a pastor commit this kind of atrocity?

A pastor, Alasco Sobowale, has been accused of raping a 12-year-old girl (name withheld) in Epe, Lagos State. The pastor was said to have allegedly had carnal knowledge of the girl at their home located at 10, Togodo Street, Temu Town.

The victim’s aunt, Mrs. Ngozi Anjorin, said the incident occurred on December 15, 2012. She said the victim only spoke Igbo Language and had recently arrived Lagos from Imo State. Pastor Sobowale, who also speaks Igbo, allegedly lured the little girl to the toilet around 9pm and had sex with her.

She said, “My niece was sent to Lagos about two weeks before the incident so I could send her to school because she doesn’t speak English Language. She only speaks Igbo and only I and the pastor, who is our neighbour, speak Igbo.

“On that particular night, my children were in the room watching television but I couldn’t find my niece. I kept on shouting her name but I got no answer. I then proceeded to the toilet which is detached from the building. I knocked on the door of the toilet and the pastor immediately ran out and I saw her inside the toilet.

“When I inquired of her what she was doing inside the toilet with the pastor, she said he lured her into the toilet and covered her mouth with his palm so she wouldn’t scream. She said the pastor brought out his penis and forced it into her anus. She said he also put his penis in her vagina and when she discharged a particular fluid, he used a handkerchief to scoop it.”

Anjorin said Sobowale, who lives with his wife and children in the same compound, fled after the incident.

Anjorin said two days later, she reported the matter to the Epe Police Division and the policemen began to look for him.

It was learnt that two days later, the police were able to arrest him.
Residents told our correspondent that after Sobowale’s arrest, some of his church members accused a six-year-old girl of bewitching the pastor and had her flogged and paraded.

A source, who craved anonymity, said, “Sobowale is not actually the head pastor. His wife is the senior pastor of the church known as Okiki Imole. A few days after the incident, a six-year-old girl was branded a witch and accused of manipulating the pastor to commit the dastardly act.

he report further stated that there was sperm residue in the victim’s private part and it was concluded that she had been sexually assaulted.
A doctor, who spoke to our correspondent on the condition of anonymity, said because Sobowale had not provided his sperm sample, it was impossible to ascertain if it was his own sperm that was found in the victim’s private part.

Punch metro learnt that Sobowale was released a few days later and charges against him dropped.
Anjorin however protested the development, adding it was not safe for her niece to live in the same compound with Sobowale.

A neighbour, who craved anonymity, said it was the habit of policemen in the area to cover up such crimes.

“Whenever a crime of this nature occurs, the police would ask the suspect to offset the victim’s hospital bill and then grant the suspect bail. It is very common in areas like Epe because it is not situated in the metropolis,” he said.

When contacted, the spokesperson for the state police command, Ngozi Braide, confirmed that the girl was raped. Braide said the police had not taken sides, adding that the pastor was released on bail because courts were not in session.

“The pastor is in charge of a white garment church in the area. He will be charged with sodomy. He was released on bail because courts are not sitting but once courts resume, he will be charged,” she said.
Posted by Unknown at 07:07