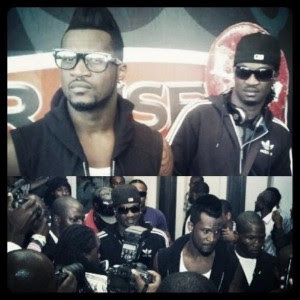 From the Hiphop World Magazine:

Born to the same mother, on the same day within just eight minutes of each other, grown up doing almost everything together, the duo of Peter and Paul of P-Square have in January, 2013, have parted ways….
To two different vacation spots.

For many, December is the holiday month they look forward to every year. This is not the same for P Square who do back-to-back shows, helping fans enjoy their holiday by performing at concerts, end of year parties and various kinds of events.

P-Square definitely had one of their busiest seasons last year. Now, for these hard working Jacks, it’s time to play; and they are choosing different vacation spots in the United States.

Last week, Paul was spotted in Atlanta, while Peter told us he’s hanging out in San Francisco with kids Cameron and Lola. The multi-award winning duo and triple Headies winners at the 2012 edition say they’re "chopping their money" separately.
Posted by Unknown at 21:51