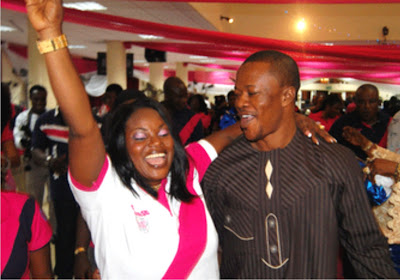 Why do Nigerian actors/actresses and musicians preach something else and do the opposite?

When the Holy Bible asserted that in the last days, many will come out claiming to be servants of God while going about deceiving people, many do not really grasp the import of that message. But what can one make of a situation where a so called Gospel artiste would stoop so low as to sleeping with any lady that caught his fancy, to the extent of putting them in a family way?

This is the story currently making the rounds within the hallowed world of Gospel singer, Lanre Teriba popularly known as Atorise. It is about the unknown social acts of this handsome musician.

From what Olufamous.com scooped from sources, the talented musician is described by insiders as very randy. He doesn't spares anything in skirt!

His love for unsafe sex is well-known by his fans, especially female ones, who always crave for his attention, regardless of the sexual attachment that comes with it.

As at the last count, the highly revered musician is alleged to be fathering five kids from different women. Findings revealed that he fathered these kids yet he'e is not taking good care of them. He often abandons the kids and their mothers to their own fate.

Despite all these, he does not have a wife that he’s legally married to in his home. According to a Nigerian Film source, the withdrawal of his Evangelist title is as a result of the immoral acts displayed by the singer.
Posted by Unknown at 02:45