Sanusi Lamido Sanusi as the new Emir of Kano. 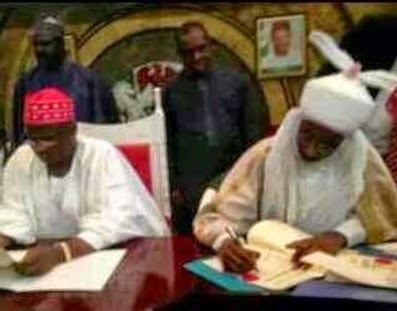 The new Emir of Kano, Sanusi, signing his letter of appointment.

The Kano State Government has confirmed former Central Bank Governor Sanusi Lamido Sanusi as the new Emir of Kano.Sanusi’s appointment, which was formally announced at the ante chamber of the Kano Government House by Secretary to the State Government, Mr. Rabiu Bichi, took immediate effect.Bichi, who made the announcement in Kano State Government House on Sunday, added that the date of his turbanning would be announced in due course by the kingmakers as soon as arrangements were concluded.
The SSG explained that Sanusi, who holds the traditional title of Majen Kano, emerged as the unanimous choice of the Kingmakers, adding that the emergence of the new Kano emir was the will of the Almighty Allah.The former CBN governor became the 14thEmir of Kano, succeeding Alhaji Abdullahi Ado Bayero, who died on Friday.Bayero was believed to have died of heart attack about one month after returning from a medical trip to London.Bichi was however silent on the fate of the three other shortlisted contenders to succeed the late Emir.
Posted by Unknown at 01:20