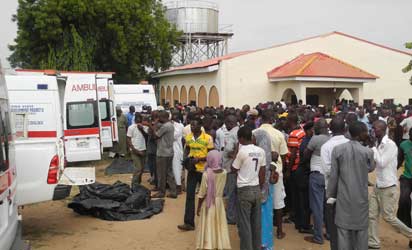 If you live abroad and hear some of these stories, you would be too scared to come back home. But thankfully this violence is not spread across Nigeria. I'm sure by now most of you have heard about the killing of many security operatives in Nassarawa State. For those who haven't heard, let me summarise it.
On Tuesday May 7th, Nassarawa State Commissioner of Police sent police officers, SSS and Civil Defense personnel to arrest the cult leader of a notorious militia group called 'Ombatse' (a cult group of the Eggon people of Nasarawa State) at Assakyo Village in Lafia, Nassarawa state. (Ombatse in Eggon language means “time has come”).
The state government wanted to arrest the chief priest because the group had been causing security concerns in the state. Unfortunately for the police officers sent to pick the man up, as they approached the Ombatse Shrine in a forest, members of the militia group who had laid ambush for them attacked and killed plenty of them. Many of the police officers were burnt beyond recognition.
The police command later said that only 17 out of the 90 police officers, minus SSS and NSCDC personnel, who went on the mission returned...and all with various degrees of wounds. Graphic photo when you continue... 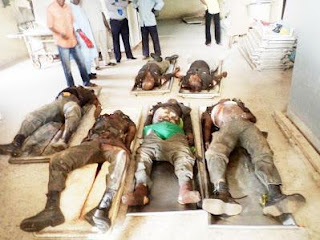 Also, out of the 11 police patrol vans used to convey the mobile policemen for the operation, eight were burnt beyond recognition by the militia group.

The Nassarawa Commissioner of Police explains why they wanted to arrest the Ombatse cult leader:


"The militia group called Ombatse was going about in mosques and churches forcing all people of Eggon extraction in and out of Lafia to drink a particular concoction prepared from herbs and anyone who failed to comply was beaten up and harassed. It was agreed at the state security meeting that the Ombatse Shrine priest be arrested to stop such activities.”

Only a few Ombatse worshipers were killed in an operation that lasted almost 24 hours, while at least 60 security operatives were killed. Over 100 bodies, some of them burnt beyond recognition, were displayed at the Dalhatu Araf Specialist Hospital in Lafia for identifications by friends and relatives of the slain police men.

The incident even forced President Jonathan to call off his planned visit to Namibia on Thursday. 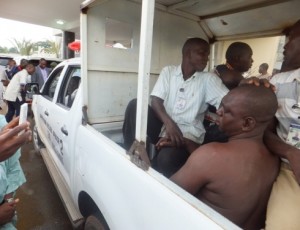 Meanwhile, the Nasarawa State police command yesterday arrested two policemen who allegedly tipped off the cultists, leading to the deaths of their colleagues. The two police corporals, Corporal Enugu (pictured above) and Corporal Haruna Joseph, are of Eggon origin.
Posted by Unknown at 22:26