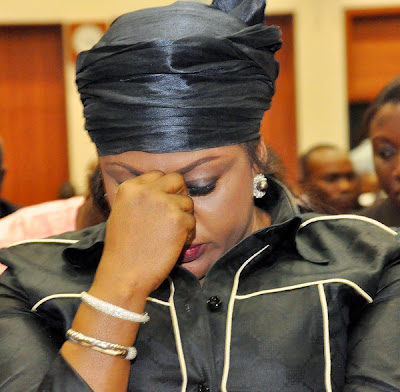 The heat is on. Nigeria's most visible anti-corruption watchdog led by a former legislator, Hon. Dino Melaye, has given Nigeria's Minister of Aviation, Stella Oduah 72 hours to resign from office.

The ultimatum follows revelations that she arm-twisted a cash-strapped agency, the NCAA, to purchase two armored BMW 760 Li cars for her at highly inflated prices from N96m to N255m.

BMB gathered from a top source in Abuja that even President Goodluck Jonathan is shocked at Stella Oduah's spending of N255m for just two cars but he can't do anything due to some reasons.
Anyway, Dino Melaye said his group will embark on series of actions to force President Jonathan to fire Mrs. Oduah as a minister of the Federal Republic of Nigeria as well as order her to return the $1.6 million to the Nigeria Civil Aviation Authority, which was forced to buy the cars.

Dino Melaye said the purchase of the vehicles was done in violation of the various rules and law guiding such high-level procurement by government officials, particularly the monetiazation policy of federal government.

First, Dino Melaye said he is heading to court next Tuesday to force the EFCC to prosecute the Minister.

On the cost of the vehicles, Melaye described them as “unconscionable,” recalling that the Speaker of House of Reps also purchased two Armored Mercedes Benz S-600 B7 grade armored cars a year ago for less than $800,000.

He also disclosed that he had requested for quotations from Germany that show that the vehicles actually cost less than $200,000 each. Even then, he stressed, the Minister has no right to purchase the vehicles for her personal use in the first place.

Stella Oduah is the co-chair of President Jonathan’s main presidential campaign team, Neighbor-2-Neighbor hence she may not be sacked since Jonathan is known to romance corrupt people openly.
Source: olufamous
Posted by Unknown at 16:12