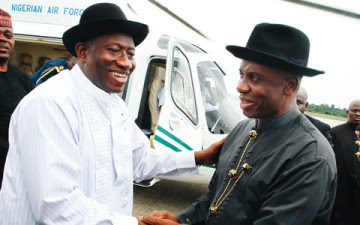 This time there was no overzealous presidential guard to bounce Governor Rotimi Amaechi as Mr President, Goodluck Jonathan landed in his state's capital, Port Harcourt, on his way to his hometown, Otuoke in Ogbia Local Government Area of Bayelsa. They exchanged pleasantries without interference.

Asked if all is now well between both men, Jonathan's spokesman, Reuben Abati said:

“There is nothing unusual about that. “It is the duty of a state governor to receive and see the President off when he visits a state. In the event that the governor is not available, the deputy governor carries out the task. This is part of protocol.

It is public knowledge that Governor Amaechi has been having a running battle with the President in what many believe is part of the build up to the 2015 elections.

Their frosty relationship climaxed when Amaechi contested and won the Nigeria Governors’ Forum election despite a warning from the PDP that Amaechi should not contest the election.
Posted by Unknown at 13:09