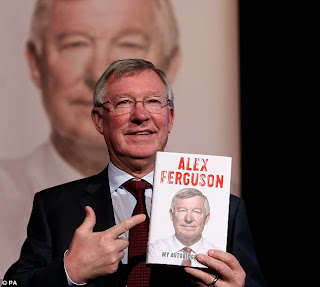 Angry readers of Alex Ferguson's best-selling autobiography have expressed their disappointment over a host of factual errors found in the 402-page book. 45 of them were identified. Hodder and Stoughton, publishers of the UK's fastest-selling non-fiction book have admitted their fault and are even willing to reimburse one particular reader who remains unhappy.


Replying one of the couple of mails received on the matter, Jamie Hodder-Williams, CEO of the publishing outfit wrote thus, "We did in fact go through several stages of factchecking with this book, with a reading from within Manchester United as well as from a specialist football fact-checker. Although a very large number of corrections were made we plainly did not pick up everything. Possible corrections that have so far been helpfully pointed out are being checked and will be included in future reprints.

"I am sorry that you feel that your expenditure on the book was not worthwhile. If you would like to send
the book to me at our head office address, stating where you bought the book and at what price, we will
refund your expenditure and postage."


Some of the errors found in the book include.
(1) Roy Keane's spell at Manchester United was for 11 years instead of 12
(2) Ryan Giggs made his debut for Manchester United at age 16 instead of 17
(3) Rio Ferdinand triumphed against
Manchester City in the semi-final second leg (of the Carling Cup) in 2009 at Old Trafford' when the year was actually 2010.

Culled from dailymail
Posted by Unknown at 21:26